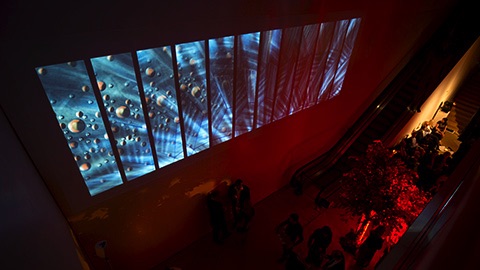 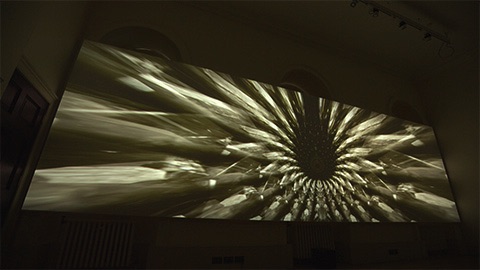 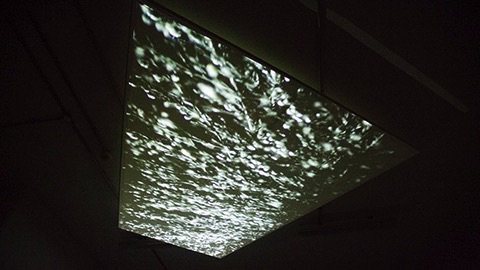 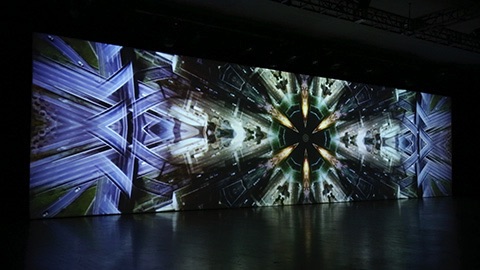 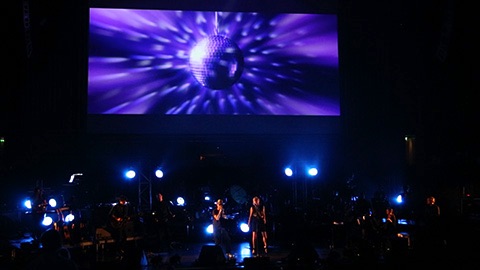 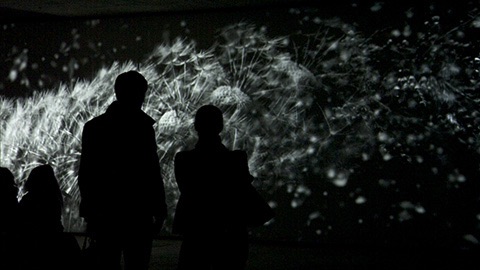 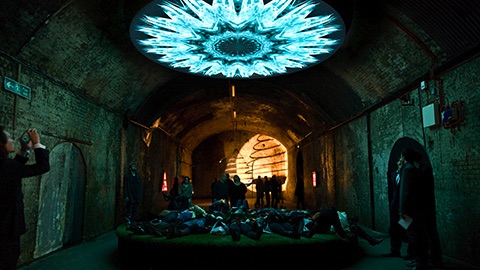 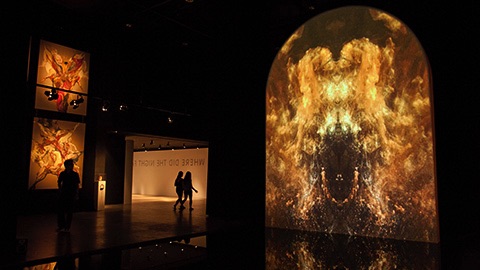 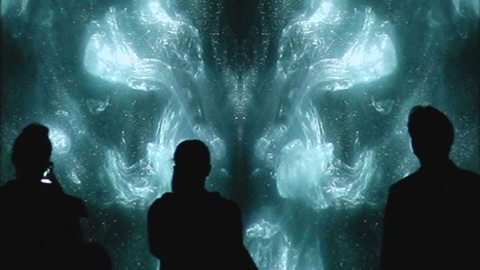 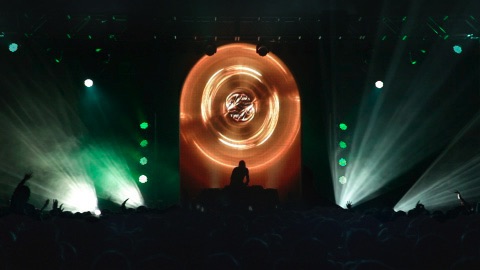 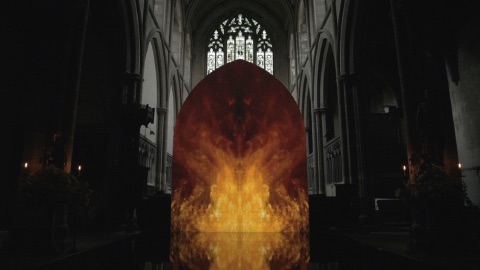 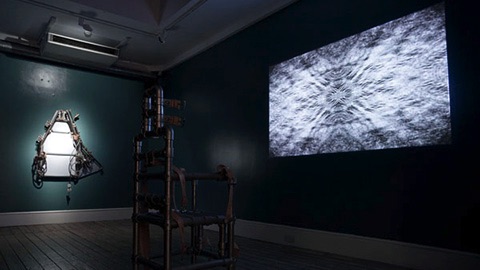 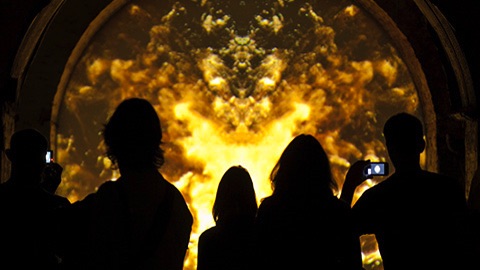 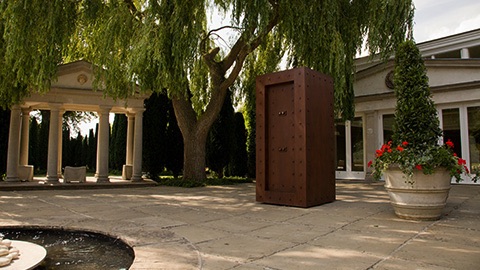 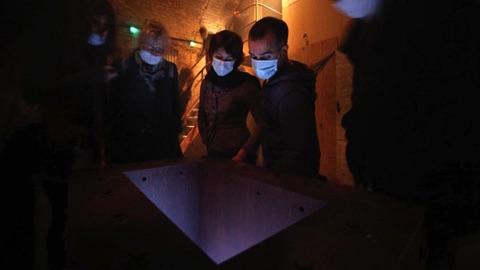 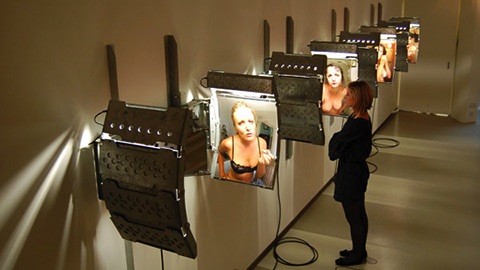 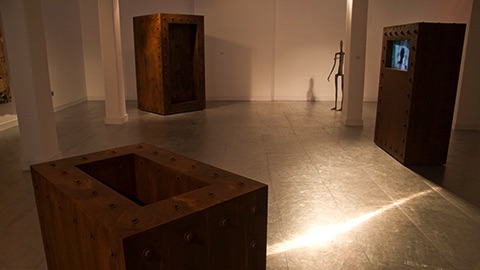 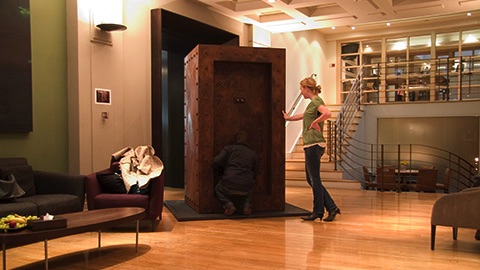 Bompas and Parr approached Foster to create two video art installations for their new bar designs at the 3Arena in Dublin. The Bar Neon film (shown) depicts a tunnel of futuristic architecture while the work for the Kaleidoscope bar takes the form of an ever evolving spiral skyscape. Find out more by clicking here.

Breather appeared outside the recently opened NOW Gallery, next door to the O2 Arena, for one evening in October. It was part of the monthly programme run by NOW with help from South London Art Map and Ravensbourne College.

Shangri-La at the Glastonbury Festival

The Psychotron was the centrepiece to Shangri-Heaven at the 2014 Glastonbury Festival. Mesmerising its chilled out audience in 'an escapist's paradise of hedonistic loveliness', the work filled a nine metre wide circular screen that hung from the ceiling of the twenty metre wide Heavenly Dome.

Out Of Our Heads

A distorted version of MOONLAND appeared on the ceiling of a shabby locker room, strewn with sun loungers, in the atmospheric basement maze under Shoreditch Town Hall as part of an exhibition on the theme of hallucination. Twenty-four artists and eight scientists participated in the eye-opening show curated by James Putnam and Vassiliki Tzanakou.

No Beginning, No End

Doug Foster took over the Clore Ballroom at the Royal Festival Hall with a fourteen metre wide screen showing five cyclical artworks. Single cycles from MOONLAND, Islands of the Blessed, Dark Place, Twisted Crystals and The Heretics' Gate played in rotation as a half hour loop. The ten day show was part of James Lavelle's Meltdown Festival at the Southbank Centre.

The show featured guest singers, a rock band, a DJ, a choir, an orchestra and the huge pipe organ built into the Royal Festival Hall.

Lazarides' annual off-site show found a new home in the gutted remains of the extensive, concrete basements under a brutalist office block in The Strand. Foster responded to this bunker-like space with a fourteen metre, ultra-widescreen, digital film installation called MOONLAND.

The film was inspired by the subtle and not so subtle influences that the Moon's rhythms have on us and our world.

For the last time, Lazarides took over the asylum to stage Bedlam in The Old Vic Tunnels. Foster had three installations in the show this year, one of which was in collaboration with a Bulgarian neuroscientist! Another new work, The Psychotron (above) seemed to engage the public's imagination by providing them with a recumbent, meditative visual experience.

You can see a short film about the show by clicking here.

Chimera and Frozen were featured as part of Secret Cinema's  large scale, interactive presentation of Ridley Scott's Prometheus which was staged throughout June. The installations were designed to be discovered in the sinister gloom of an alien pyramid and the hidden depths of the space ship respectively. You can see some images of the event  here.

Daydreaming With... The Hong Kong Edition

Daydreaming With... partnered with the Hong Kong based arts organisation Future Industries to present Daydreaming with… The Hong Kong Edition, co-curated by James Lavelle and Hong Kong artist Simon Birch. The Heretics' Gate took centre stage at the show, which ran from May until June on the vast, double height ground floor of a modern skyscraper.

For the second year running Lazarides took over The Old Vic Tunnels to curate a labyrinth of installations, this time based on the myth of the Minotaur. Foster's contribution, Chimera, was a large scale digital projection featuring ever mutating symmetrical forms inspired by the genetic soup in which we all swim.

Foster's first collaboration with James Lavelle led to him creating all the imagery for UNKLE's audio-visual DJ experience, UNKLE Sounds. Many specially made films and some existing works were displayed on a six metre tall arched LED screen for the ninety minute show. You can see a short clip of the show by clicking here.

In the Naughty Chair

For his first solo exhibition with Lazarides, Foster showcased a selection of his most celebrated works alongside his newest digital film installation, Brainwasher. The gallery's two floors were transformed into a stark, clinical setting for the artist's stereoscopic and high-definition screen works.

The Heretics' Gate was created for this exhibition on the theme of Dante's Inferno, devised by Lazarides gallery. The high-definition digital projection filled one of the crumbling brick arches in The Old Vic Tunnels with an ectoplasmic rendition of the Heretics' circle of hell. The spectacle was reflected perfectly by a large pool of water that flooded two vaults. The ethereal symmetry conjured up visions of demons and human anatomy that seemed to mesmerise the audience.

Breather appeared for one night only at Elton John’s White Tie and Tiara Ball, his annual Fund Raising Event for the Elton John Aids Foundation. It stood under a weeping willow on the Roman Terrace at Elton’s Windsor home. The theme of that year’s event was Contemporary Art and it coincided with the opening of a new art gallery at Woodside.

Breather and Frozen were chosen to be part of this large scale combination of installation art and interactive theatre, devised by The Old Vic and Punchdrunk.

The show was inspired by Fritz Lang’s Metropolis, his ground breaking 1927 film that depicts a future city inhabited by affluent rulers who live in luxurious skyscrapers and poor, repressed workers, who spend their whole lives underground.

Works from the David Roberts Collection

Breather, BOB and Frozen were exhibited at the first show by The David Roberts Foundation at its newly opened space in Great Titchfield Street.

This was the first showing of Breather. It was displayed in the reception area of The Mill, one of the largest post-production companies in Europe.

Preview versions of BOB and Islands of the Blessed were shown on the opening night. Breather ran for three weeks.

Foster is one of fifty-five artists who created artworks inspired by the films of Stanley Kubrick for this exhibition, curated by James Lavelle and James Putnam. Beyond the Infinite is a widescreen tunnel of textured light, that pays homage to the famous 'stargate' sequence in 2001: A Space Odyssey. Find out more about the show here.

Still Here, A Decade of Lazarides

Lazarides staged a group show over three floors at its Rathbone Place gallery to celebrate its ten year anniversary. Forty-two Lazarides artists provided works for the exhibition. Foster created a ultra high defintion projection called Fortuna's Wheel that could only be viewed through three holes in a wall. 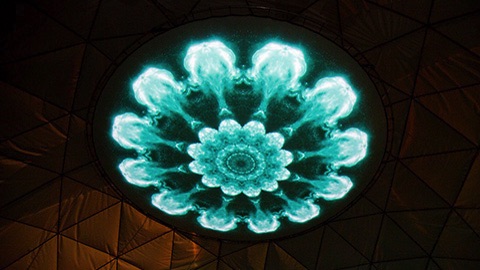 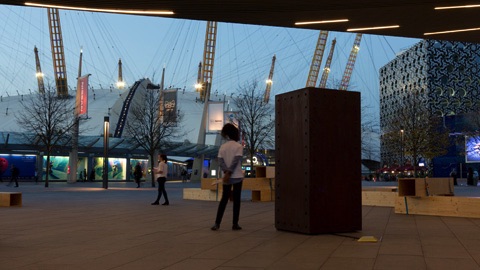 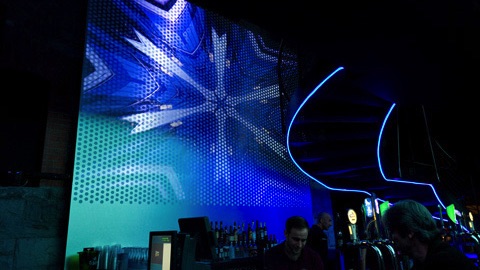 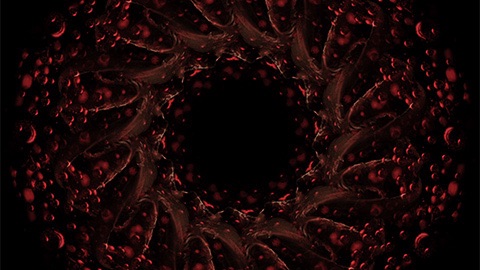 Foster was approached by Big Guns to create a graceful widescreen projection centrepiece for a thirtieth anniversary party held for luxury furniture maker Silverlining at the National Portrait Gallery. The work featured some of the exquisitely crafted pieces that can only be found in palaces, ultra-high-end residences and megayachts. 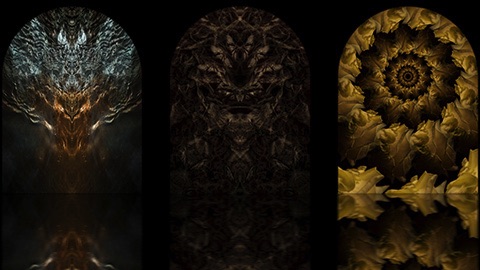 Hong Kong based artist Simon Birch spent several years assembling this touring exhibition of large scale artworks, made in collaboration with artists from China, the UK, the USA and Canada. Foster created two digital film installations for the show. 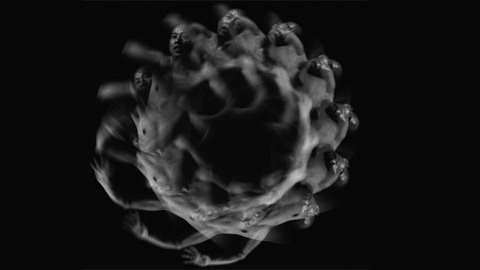 Beyond the Road merged the worlds of visual art, music and film in a reconstruction of audio and visual elements from the UNKLE albums The Road: Part I and The Road: Part II / Lost Highway.

This multi-sensory experience filled the entire top floor of the Saatchi Gallery and included works by many contemporary artists and filmmakers.

Beyond the Road was an independent project created by Colin Nightingale (Punchdrunk), Stephen Dobbie (Punchdrunk) and James Lavelle (UNKLE) in collaboration with the Saatchi Gallery.

Foster contributed four video installations to this underground celebration of Fantasia: Walt Disney's animated feature film from 1940. The film popularised the use of abstract imagery in synchrony with music, pioneered by experimental animators such as Oskar Fischinger.